Don't Tell Them "What Do You Say?" 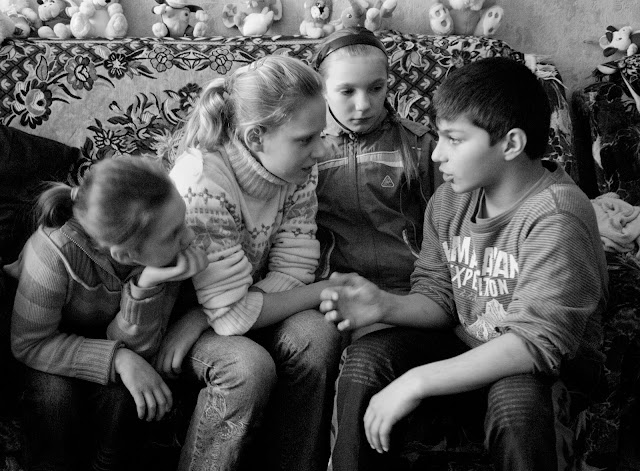 Very often, I hear parents tell their toddlers or young children, "What do you say?" after receiving a gift or help from someone.  I have one  thing to say, "Don't do it."

Most often, toddlers and children don't respond to this well-intended command for one simple reason - they aren't ready yet.  One thing I know from both teaching and parenting is that an obsessive amount of modeling and mimicking leads to developmental and learned changes, whereas a well-intended command often leads to a blank face.

The better thing to do with our toddlers and young children is to use, "Say thank you," with a slightly high pitched tone at the end to note an invitation, rather than a demand to perform.  Instead of a blank face, I believe toddlers and young kids respond differently to this type of modeling and mimicking.  The truth is that toddlers' and young kids' cognitive brains are still developing, and though we might think my child knows what to say, the reality is that they might NOT actually know what to say in the moment without copying and repeating you.

Over time, with enough modeling and mimicking, they will begin to say "Thank you" on their own, without being asked to do so.  This is not just a good way to teach them how to say "Thank you", but a way to help them do lots of things in their developmental growth and learning. 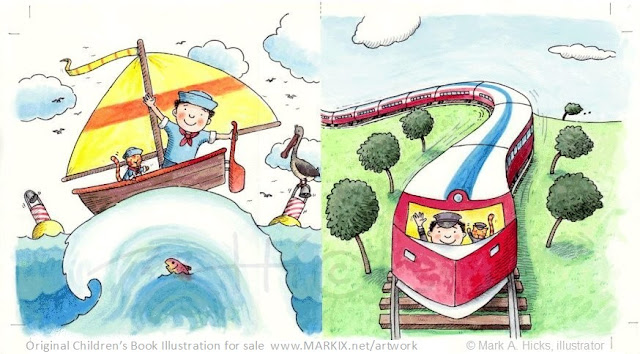 When we read books to our toddlers and young children, the stories are not the only things to focus on.  I didn't realize this until I had my own kid, of course.  The artwork is often amazing, and slowing down to point out the artwork to our kids can be extremely life-giving and emotionally connective.

Take the above paintings.  First of all, the faces are so important.  I can say, "He has a happy face.  Oh, and look, his cheeks are red and he's holding his arms out.  He's having a fun time! And, in the train, they are both waving and the boy is smiling.  How do you think they feel?"

For me, focusing on the feelings in artwork for a child is super important.  In fact, this might be number one over anything else because it is so helpful for their emotional development.

Beyond identifying feelings in the pictures, the artwork itself can be pointed out as well.  "Look at that wave.  It's moving and curvy and blue and white.  It looks like that fish is all wrapped up in it.  In the back there's a stork and way in the back, in the sky, there are a lot of birds flying around.  Do you see those birds?"

"Look how fast that train is moving.  Do you see these lines on each side of the train?  That means it is moving fast.  And, look at these trees.  They are bending away from the train!  Have you ever seen trees bending away from a train before?  I don't think a train can really bend trees, but you know what can bend trees like that?  The wind.  Yes, the wind can bend the trees and then they are swaying in the wind."

Colors and shapes can also be pointed out.  "That sail is really cool looking.  It's yellow with an orange stripe going right through the middle of it.  Do you like orange and yellow?

The whole idea in what I'm talking about is to slow things down.  We can burn through ten books at once, or we can work through one or two books by paying attention to the artwork in addition to the stories themselves.  I think that helping our children to pay attention to artwork can also help them learn to be more mindful, as in focusing in on the present.  It's almost like a form of meditation.  It is a way to emotionally attune with our young ones.

Oh, and of course, if they get bored with slowing down, they'll let us know when it's time to turn the page and get on with the story!