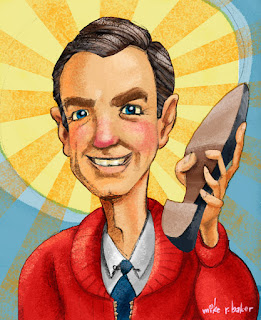 Mr. Rogers used to tell his TV audience, "I like doing this with you," or "I like doing that with you."  He was always telling us what he liked to do with us.  Ever since I was a child, I remembered this about him, and as a father, I have brought it into my own regular use of expressions.  "I like riding bikes with you," or "I like going to the park with you."  Our kids, whether 12 months old, 12 years old, or 25 years old want to know the things we like to do with them.

Another thing I think kids want to know is what they do well too.  "Hey, you're really good at tying your shoes," or "The way you helped that kid today was really thoughtful and a smart way to do it."  Things like these.  They might want to know we like the clothes they are wearing as well.  "That dress is really cute with the flowers on it.  You always pick out nice dresses." Or, "That army jacket is really cool.  That was a good pick on your part at the store last week."

But, don't take my word for it.  Try it out.  Get on YouTube, PBS, or Amazon Prime and watch some of the old Mr. Roger's shows.  Steal his stuff.  You don't have to use his well-developed style of voice - I certainly don't.  I use my authentic voice and always tell my child the truth as I see it, not exactly the same way as Mr. Roger's might have seen it.  Nevertheless, I do steal from Mr. Rogers, and quite liberally.  Oh, and don't forget, you can steal the songs too.

I am certain that Mr. Rogers would endorse our crimes against him by stealing from him.